Rachael Harrie at Rach Writes has given us Crusaders a challenge. In 300 words or less, we must tell:
“• one secret
• one lie
• one interesting quirk
• one annoying habit
• one of your best character traits, and
• one of your favourite things in the whole world.
The post can be in any format, including poetry (for those poets among us), but must include the random words, “bloviate,” “fuliguline,” “rabbit,” and “blade” (tee hee).”

Obviously this is how Rach gets her sick kicks! Lol!

The Night of the Were Rabbit
Duhn, duhn duuuh 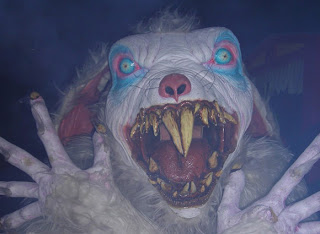 I really hate to bloviate but I, Amanda M. Milner, talk to animals. In high school I was a member of the FFA -Future Farmers of America-though I just joined for the animals. I never did any farming. I had two roosters, a goat, a lamb, a cow, a fuliguline and of course dogs, cats and rats.
My best friend had a rabbit-a fancy, flop eared kind. She entered it into the county fair & desperately wanted me to show a rabbit with her. Oddly, my parents weren’t down with me getting a rabbit.
No problem. I talk to animals. I could get one of the wild ones down by the dam. So by the dim light of the setting September sun we snuck onto the grounds and within minutes I had me a plump brown rabbit. The same night a thunder storm shook our house & I heard strange noises coming from the bunny enclosure. What I saw in the flash of lightening disturbed me greatly. Blood glistened on the bunny’s white whiskers. And around the cage were small fluffy balls, miniature rabbits.
My heart raced.
Food & water after midnight.
Bright light…Oh My Gawd! The lightening!
It’s a Were Rabbit!!
Maternal instinct kicked in, I couldn’t leave the surviving little guys in there with that thing. They looked too much like babies. I took a deep breath & opened the cage door. I grabbed the 1st one without a problem. But when I went for the next one crimson teeth flashed and sliced into my arm like a blade. Talking to her didn’t help. She wasn’t an animal, she was a monster. And she had just infected me. Now, when the harvest moon rises, an urge so powerful overwhelms me.
Carrots, potatoes, radishes.
I hunger for them.
Preferably in stew form.
So, if in the orange glow of the Harvest Moon you hear the death cries of root vegetables, you might suspect a Were Rabbit is near.
Or it might be me.
~So, one of these fun facts is actually a lie. Can you guess which one it is? I bet you're wrong. ;)

Posted by Amanda Milner at 7:59 PM